Tom Stienstra, writing for the Chronicle, says that changes in the behavior of marine life may signal a coming El Niño.

Based on wildlife, not the forecast, there’s strength in the premise that an El Niño is gaining muscle this summer.

In recent years, early El Niños were waylaid in midsummer by changes in Pacific sea currents. Tracking the migration of exotic southern species to northern waters along the Pacific Coast could be a better way to forecast long-term weather patterns. Who could know better than the animals?

The big El Niño of 1982-83 was forecast by the arrival of bonito in San Francisco Bay, a sailfish at the Farallon Islands and barracuda in Monterey Bay. California then received flooding rains and huge snowpacks.

By contrast, in the years when there were only a few wildlife anomalies in summer, the El Niños that were forecast didn’t take hold and there were no massive shifts in the weather that followed.

Many factors, not merely a developing El Niño, influence wildlife migrations, of course. Yet a series of verified anomalies over a wide area adds up to something very weird:

Basking sharks: Fifty basking sharks, a near-extinct species, were reported Friday offshore in Big Sur, according to marine biologost Giancarlo Thomae. We’ve never heard of something like this in NorCal waters.

Marin needlefish: On a salmon trip last week near buoys 5 and 7 off the Bay Area coast, salmon were gorging on needlefish, a fish common in subtropics yet unheard of in local waters, reported Dick Warner. “We also saw 50, 60 whales,” he said, “with krill boiling in a 15-foot diameter on the surface.”

Flying fish: Flying fish, common in Mexican waters and occasionally seen near the Channel Islands off Oxnard, were sighted in Monterey Bay, the first sighting verified by marine biologists in more than 20 years, reported Thomae.

There are eight more at SF Gate. 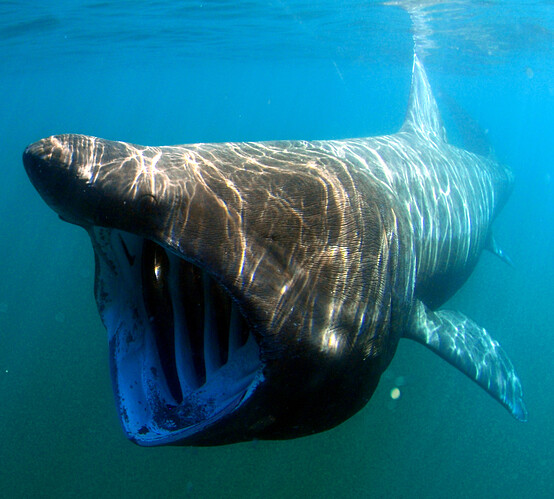 It was worth posting this just so I could run this picture of a basking shark by Greg Skomal / NOAA Fisheries Service. Licensed under Public Domain via Wikimedia Commons.

Here’s a video of a basking shark at Big Sur: