Testing LED lights on the Midcoast 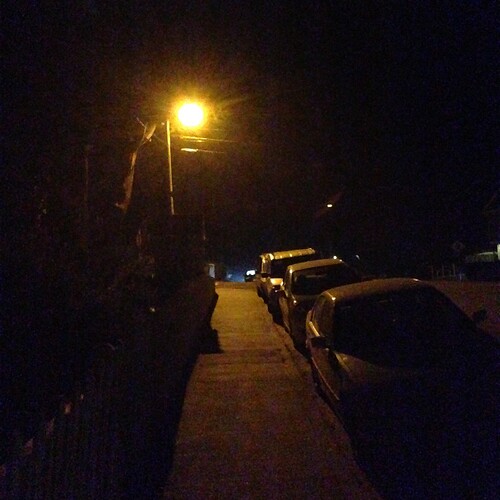 At 10:25 on Tuesday, July 21, I took a look at the amber LED light at 6th and Main in Montara. Dave Olson of the MCC went out independently and we compared notes. Our observations were strikingly similar, although I don’t think Dave agrees with my conclusions.

2. It matters if you are uphill or downhill from the light. If you’re downhill, the light is much brighter. 6th and Main is a difficult light to judge because you’re downhill in both directions, but the angle is less steep from the north. However, the brightness from lower angles is important, because most of the streets on the Midcoast are on hills.

4. I compared the LED at 6th and Main to the existing light at 6th and Farallone, which does not appear to have a diffuser. I observed the LED from 100 ft north on Main St and the existing light from 100 ft west on 6th. From each of these positions, I was slightly downhill from the lights. I’ve attached some photos I took with my iphone. I think the difference is a fair representation of my experience, although I couldn’t control the exposure, so it’s not definitive.

5. I thought there was a lot more glare from the LED light than a non-diffused existing light viewed from 100 ft at roughly the same angle. The LED’s are really unpleasant even at 100 ft. I suspect the range of unpleasantness is wider, but I was unable to check this because a tree obscured the view beyond 100 ft.

My Conclusion: PG&E is not giving us any real options, so I have no idea whether there are better alternatives to this particular LED fixture. This is not even a Hobson’s Choice, since “nothing” is not a possible option. The manufacturers, PG&E, and the county have no incentive to get this right. I think the LED’s we’re being shown are too damn bright if you’re within 100 to 150 feet of them and on the same side of the street. I suspect they’d benefit from operating at a lower brightness without damaging visibility on the street. An external diffuser would mitigate this, but it would probably result in a lot more scattered light, which is not desirable.

This is a companion discussion topic for the original entry at http://coastsider.com/site/news/testing_led_lights_on_the_midcoast
daveolsonmcc (Dave Olson) September 8, 2015, 3:20pm #4

Thanks for the detailed writeup on this, Barry. For anybody else following along, Barry and I exchanged several emails on the issue, and we do disagree on our perception of glare and brightness of this light, but as Barry noted, our observations are very similar.

It’s helpful (to me, at least!) to understand whether conclusions were reached on similar, or different data.

For what it’s worth, I lived 1/2 block away from the demonstration light at 6th&Main for 3 years, so I may have a different perception than those who saw both the old one, and the new one as “passers by” (and it is a busy interesection!)